After the disappearance of the  Philips Picopix PPX4935, Vivitek placed its Qumi in a good position in the pico projector segment. Among them, the Qumi Q38 carries a DLP Texas Instruments TRP 0.33 “DMD chip displaying a Full HD definition of 1,920 x 1,080 px, two 2-watt speakers, a 12,000 mAh battery ensuring a battery life of 2 hours, and a variant of the Android system allowing you to install some applications.

The manufacturer announces a brightness of 600 lumens, a contrast of 10,000: 1, and a lifetime of the LEDs of 30,000 hours. Sold around 650 €, the Vivitek Qumi Q38 is quite expensive, but it is one of the few ultra-compact video projectors to display a Full HD image. 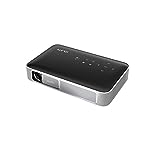 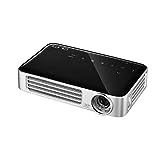 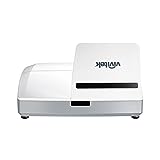 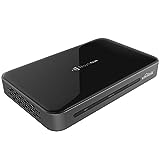 This Vivitek Qumi Q38 projector is equipped with fixed optics with a ratio of 1.2: 1. It can project a basic 2.5-meter image with a distance of 3 meters. With this model, our measurements are taken at 2.5 m in order to obtain an image of 2 m base. This projector does not offer lens-shift, but it is of course possible to modify the horizontal and vertical trapezoid to compensate for the tilt of the projector at the cost of a slight loss of definition.

Cinema mode offers the most faithful rendering, at least if we can consider that as faithful. Indeed, the average delta E (difference between the expected colors and the displayed colors), measured at 7, is far from the limit (below 3) under which the human eye no longer perceives the drifts. The color drift is therefore visible, especially on blue, yellow, magenta, and pastel blue, the delta E differences of which exceed 9.

Gamma management is not free from faults. The mean measured at 1.9 is quite far from the reference value (2.2) and the curve lacks stability.

The default temperature for Cinema mode heat exceeds 11,000 K. In order to lower this value a little, we chose the “user” temperature mode and then set the “red” to 100. This small setting makes it possible to lower the temperature at 10,070 K, a value very far from the 6,500 K reference. However, the curve is relatively stable over the entire spectrum.

This projector measures 18.8 x 11.8 x 3.4 cm and weighs 750 grams. It is therefore compact enough to slip into the bottom of a backpack. A practical sliding cover protects the optics during transport. Note that this model also has a 12,000 mAh battery ensuring approximately 2 hours of autonomy.

Below, there is a screw thread for mounting on a tripod or fixing to the ceiling as well as a foot for slightly raising the projector.

Like the Qumi Q8, the Vivitek Qumi Q38 has tactile keys allowing access to the various functions and fine-tuning the settings. The focusing is mechanical and is carried out using dedicated tactile keys. As often, the quality of the two 2 watt speakers is just enough to watch a TV program. For the rest, you must use an external system, such as a PC speaker kit or a small wireless speaker, this projector is Bluetooth compatible.

The external power supply of the Qumi Q38 is quite bulky, especially compared to the size of the projector. It allows you to use it at full power and recharge the battery in about two hours.

The connectors assembled at the rear consist of an HDMI input, two USB ports, a headphone output and a microSD memory card slot. On the far left, there is the only infrared receiver and the remote control therefore only works from the rear of the projector, which is far from practical. Finally, the Qumi Q38 also includes Wi-Fi and, as we have already said, Bluetooth.

Very light and simple, the remote control has rubber buttons pleasant to the touch, but not backlit. It allows access to all the settings and to carry out remote focusing. As said before, it only works from the back of the projector.

The consumption of the Vivitek Qumi Q38 is very measured since it consumes only 37 watts in maximum brightness (21 cd / m²). Eco mode is only accessible on the battery and the brightness then drops to 15 cd / m². However, in terms of noise, it’s a different story. The Qumi Q38 is a real wind tunnel. We measured noise of 42 dB (A) in normal mode when connected to the mains. Once disconnected, the noise goes to 39.7 dB (A), but it’s still too much, especially since the acute noise is particularly annoying.

Finally, on the autonomy side, the video projector holds up well for the 2 hours announced.

The Qumi Q38 is ultimately the Full HD version of the Qumi Q3 Plus and, unfortunately for him, we prefer the latter which offers a better quality/price ratio. On a compact projector, Full HD is not an essential argument and the HD definition of the Q3 Plus is more than sufficient. The Qumi Q38 is also far too noisy to be advised.