More than three years after the Ricoh GRII’s release, the GR III brings its share of new features such as a new more defined, and stabilized sensor and a new hybrid autofocus system. Developments that unfortunately do not upset the practice.

Ricoh GR. This name is probably familiar to you as the brand has declined it in different models since its first copy in 1996. This Ricoh GR III is the third model equipped with an APS-C sensor with a higher definition since it is here 24. 2 Mpx against 16 Mpx on the GR II. This CMOS sensor is now equipped with a mechanical stabilization system on 3 axes and is accompanied by a new objective with the revised formulation but which retains the same angle of field, equivalent to 28 mm in 24×36, and a maximum opening. f / 2.8. The autofocus, so far performed only by contrast analysis on the sensor, becomes hybrid.

Unfortunately, Ricoh does not indicate on how many points the phase correlation analysis is done. To compensate for the absence of a low-pass filter which could cause moiré on certain subjects. Pentax has introduced the AA filter simulation function which can be adjusted in two steps (Strong or Weak).

If the device looks like it is mistaken for its predecessor, note the efforts of Ricoh to make it more compact. Unfortunately, this is done at the expense of the built-in flash which simply disappears. All the same, remains an accessory shoe that can receive a flash or an optical viewfinder. Because the camera does not have a viewfinder either.

The screen at the back is replaced by a touch screen, but still not orientable. The ergonomics of the device have also been slightly revised. 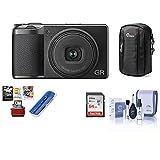 In appearance, the Ricoh GR III changes little. And it is rather a positive point as its sober case – small pavement provided only with a slightly rounded handle – has seduced its users who appreciate being able to slip it into a pocket. Its dimensions have nevertheless been revised downwards since the device loses approximately 1 cm in height, 8 cm in length, and more than 1 cm in thickness. Its weight is almost the same. In practice, the difference is not obvious and changes habit little since the GR II was already very compact. Above all, this mode is to the detriment of the built-in flash, which is very useful for unblocking a backlight or for controlling an external flash remotely, as was the case with the GR II.

As on the previous model, a removable ring was placed around the lens to protect the connectors allowing the GW-4 converter to be mounted to obtain a 21 mm equivalent. Unfortunately, the latter does not hold properly. After having recovered it several times when it detached from the device, we simply lost it so as never to find it again! Too bad that Ricoh has not changed this already unreliable system on previous models …

Note that despite its thinning, the Ricoh GR III retains a very good grip; we have never feared that it would slip between our fingers, and never have we struggled to reach its various settings. However, we would really have preferred that the GR. III incorporates an adjustable screen or a retractable electronic viewfinder. Because on the ground, its 3 “screen has shown its limits many times when we were in direct sunlight. Or when we wanted to adopt different points while underwater or at ground level.

The ergonomics of the device’s menus are not the most user-friendly. Admittedly, the touch screen interface now allows you to quickly go to one of the menus of the device with a simple press of your finger while you can scroll through the various settings by swiping on the screen. But the interface remains austere, the settings piled up one behind the other and the reactivity of the tactile validation could be improved. This Ricoh GR III is sorely lacking a simplified menu like most brands offer today.

However, via the device menu, several keys can be personalized. Again, the menu would have benefited from sporting a more welcoming interface with, for example, an overview of all the configurable keys. Regulars of the brand will certainly not be embarrassed and the “style” Ricoh even has its followers. But recognize that we appreciate the more graphic interfaces with a few colors to distinguish menus and submenus. Here the points located to the right of each tab are difficult to click and do not always correspond to a new sub-menu page.

On the case, we note the disappearance of the AEL / AFL to C-AF lever replaced by an. Fn key, zoom buttons and the different arrangement of the Menu / ok and self-timer keys. Above all, Ricoh replaced the four-position selector with a toothed wheel. In practice, we continued to prefer the wheel placed on the front, just below the index finger.

By announcing the replacement of its sensor for a 24. Mpx model equipped with a hybrid autofocus and the introduction of a new GR. Engine 6 processor, Ricoh promised great processing speed and much faster development. In reality, the changes are not as dramatic.

The camera starts very quickly, about three times faster than its predecessor. But this very good first impression leaves room for a little disappointment when it comes to experiencing its autofocus. The expected progress on the new hybrid system is not there: in full light as in our 3 lux lighting, the measurements are substantially equivalent to those measured on the GR II and remain lower than those of a Canon G1 X Mark III , from a Leica Q2 or from a Fujifilm X100F , except for the measurement in low light.

If the values ​​are not bad, we have repeatedly encountered pumping problems during our field tests. So much so that the Snap function which had made the reputation of the GR and GR II by offering rapid focusing at a given distance and which was thought superfluous on the GR III retains in reality all its usefulness. The update to version 1.1 did not seem to bring spectacular developments.

As for the burst, you can imagine, we are not in the presence of an ultra-sporty box. Like its predecessor, the Ricoh GR III offers significantly better results in Raw than in Jepg, but its autonomy remains very limited. The buffer becomes full from the eleventh image …

A large APS-C sensor capable of delivering richly defined images even in high sensitivity … these are the qualities of the GR II that we hoped to find in the Ricoh GR III. But the increase in definition could have negative effects on this increase in sensitivity that our laboratory tests seem to highlight. While we indicated that it was possible to work in Jpeg up to ISO. 6400 without ulterior motive, we note here a clear degradation past ISO 3200. The noise is then too present and harms the rendering of details.

In addition, we noted a lack of contrast on Jpegs which greatly encourages working in Raw to make adjustments in post-processing. Exposure metering has generally been a little undervalued. We have often been forced to compensate with a correction for overexposure when shooting. Mechanical stabilization of the sensor allows low shutter speeds to be used without worry. But difficult to really measure its benefits because it was already the case with the GR II, thanks to its soft trigger and its good grip. Its presence is a more significant but which does not justify in our eyes to move from a GR II to a GR III.

Ricoh indicates having reviewed the manufacture of his lens which, if it does not offer a higher aperture, turns out to be one of the strong points of this camera. The sharpness is high from the full opening and the rendering very homogeneous between the center and the edges of the image. On the other hand, the diffraction appears from f / 11 and then harms the rendering of the details.

The Ricoh GR II was not very good on video and we cannot say that the Ricoh GR III succeeds it brilliantly on this point. No 4K, but above all a Full HD mode which, if it progresses slightly to offer a 60p frame rate, still does not offer any high-speed mode for slow motion and always generates slight cropping in the image.

Do not count on continuous autofocus to follow a moving subject, it is simply impossible. Add to that quite poor image quality, and no headset or microphone connection. If you are looking for a versatile device capable of serving as a photo and video notebook, go your way because you will be very disappointed with this product. What a shame in 2019 that Ricoh is not able to provide a better video mode …

If it is an interesting device by its compactness, its handling, and the quality of its images – which we will gladly do on Raw. The Ricoh GR III unfortunately does not bring the spectacular evolutions that we expected. Its main competitor certainly remains its predecessor, the GR II which suffers from the same shortcomings in terms of video or limited autonomy, but whose price is much more attractive. Still, you must not be constrained by a lower definition (16 Mpx). The other competitors are more bulky, like the Fujifilm. X100F and also more expensive like the Canon Powershot G1 X Mark III. The Ricoh GR III is not without interest but lacked the charm to make us succumb.