The Fujinon XF18-55mm F2.8-4 R LM OIS is a lens that Fujifilm offers in kit with its APS-C housings. In addition to its standard focal range, stabilization and its wider than average aperture are its main advantages.

If sold as a kit, its success also comes from its technical sheet. The metallic part finish promises good durability, the autofocus with linear motor is announced as very fast (with a measurement of 0.1 seconds) and the Fujinon XF18-55mmF2.8-4 R LM OIS is also the first stabilized lens from the brand to the APS-C range when it was released.

In addition, its standard focal range of 18-55 mm corresponding to 27-84 mm in 35 mm format is associated with a sliding aperture f / 2.8-4 brighter than most kits with sliding opening usually offered. The optical construction consists of 14 elements divided into 10 groups. Three aspherical lenses and one with low dispersion are present in parallel with a diaphragm with seven rounded lamellae.

The Fujinon XF18-55mmF2.8-4 R LM OIS was introduced at the recommended retail price of € 749, but it is now easy to find it at a lower price. As often with this type of lens, it is with the purchase associated with housing that the savings are most substantial. 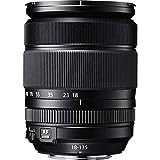 The neat look of the Fujifilm Fujinon XF18-55mm F2.8-4 R LM OIS scores points. The finish is elegant and inspires confidence. The rings engraved with fine streaks are of the most beautiful effect. Satin black punctuates this note of elegance. It is a pity that this type of design was not used on a lens such as the Fujinon GF63mmF2.8 R WR dedicated to the GF mount with which the GFX 50R medium format camera is equipped.

The overall size of the lens is rather reduced. If it is lighter than it, the weight of 330 g avoids the heavyweight category by far. It will however be necessary to deal with a variable size. The total size then goes from 70.4 mm to 97.9 mm, but this is reasonable and not necessarily annoying. Note also the quality metal construction.

We obviously cannot speak of a first prize, but this level of finish remains appreciable. The solidity seems to be in order and the Fujifilm Fujinon XF18-55mm F2.8-4 R LM OIS seems to be well equipped to accompany the photographer during his adventures. Given these qualities, it is unfortunate that the lens is not equipped with gaskets for all-weather protection which could have made it a must.

The zoom ring is large and has no particular defects. Its asserted resistance is not a real defect and may even be appreciated by some users. The ring for manual focus is located at the end of the lens. Its control is completely electronic, so there are no stops. A defect too often found on our modern optics. On the other hand, the two rings offer a fluid and very pleasant race; quality is once again the order of the day. A slight feeling of friction is detectable on the zoom control, but this is really negligible.

As for manual controls, a third ring dedicated to the opening of the diaphragm is present near the housing. Its notched rotation is exemplary. Its use with a device such as the  X-T30 in priority to the opening is a real treat. On the other hand, like the focus ring, the diaphragm control ring does not have a stop. If this choice is surely the fruit of the maximum sliding opening, it is nonetheless annoying. Finally, a shortcut to activate stabilization is positioned next to an Auto mode of the opening control. To switch to manual focus, it will be necessary to go through the housing.

The measurements in our laboratory are made in partnership with Imatest. Software, tools or charts, Imatest offers complete and tailor-made solutions to analyze and test the quality of cameras and photographic lenses.

The notion of dive is quite delicate to deal with. This is what we can assimilate to the “feeling of sharpness” or to the “precision” that we observe on an image. It can be very different from one lens to another, from one focal to another, and from one aperture to another. It can also vary between the center and the edges of the image.

The optical qualities of the Fujifilm Fujinon XF18-55mm F2.8-4 R LM OIS are undeniable. Between f / 5.6 and f / 11, the level of detail is really good. Diffraction then appears, but the loss of quality is gradual. At larger openings, optics show their age. The quality is clearly behind, the lens is probably struggling to cash the 26 Mpx of the X-T3.

Without having too large deviations, one can however note a lack of homogeneity between the center, the edge, and the corners, with measurements which lack homogeneity. In real conditions, these fluctuations should however be weighed because they are more discreet. If the overall behavior is good, the degradation in the extreme corners of the image is significant and easily detectable when the image is observed at full size. The phenomenon is more progressive, even absent on better quality objectives.

Distortion, vignetting and chromatic aberration is a trio of faults often very present with the kit lenses. Like Panasonic or Olympus on the Micro 4/3 mount, Fujifilm uses advanced correction of these phenomena directly in the housing. The JPEGs thus generated are very good. If a little vignetting and distortion are present at all focal lengths, it remains very discreet on the ground. The highlighting of a defect or another will only be done under specific conditions.

If the background blur produced by the Fujifilm Fujinon XF18-55mm F2.8-4 R LM OIS is not the most pronounced because of a limited aperture and the reduced sensor size – compared to 24×36 – , it is clear that the objective is doing well. No flare to deplore and the bubbles of the bokeh are both round and provided with discreet onion rings.

On the autofocus side, responsiveness is essential. The measurements made during the X-T30 test show this clearly. Our tests during the test period did not allow to put it in default. However, a very slight noise should be noted during its operation in the video. In a calm environment, it may be recorded during capture, which can be problematic.

Fujifilm signs here a nice kit lens. Arrived in 2012 on the market and only in 2019 in our laboratory, the Fujifilm Fujinon XF18-55mm F2.8-4 R LM OIS remains current as a standard lens. The defects are contained thanks to the correction built into the Fujifilm boxes, the sharpness is very good at the best openings, but a lack of homogeneity should be noted. Its stabilization and exemplary finish complete the Fujinon XF18-55mmF2.8-4 R LM OIS an almost essential objective.