The only joystick still in Logitech’s 2015 catalog, the Extreme 3D Pro is more aimed at casual players than lovers of realistic flight simulation. For around fifty euros, this model has a few advantages, such as an ergonomic and rotating handle, as well as an integrated throttle. 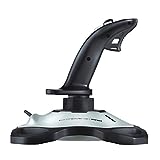 Despite its entry-level positioning, with a recommended retail price of € 49.99, the Logitech Extreme 3D Pro looks robust. The finishes are generally good and if the plastics prove to be rather basic, there is no creaking or other sign of fragility. Rather modern in appearance with its predominantly silver base, the Extreme 3D Pro remains fairly sober. On the other hand, the flexible rubber part – bicycle inner tube type – located at the base of the handle denotes with the rest and turns out to be a real dust trap, difficult to clean moreover. Logitech could have found a more elegant solution to protect the axis of rotation of its joystick.

Rather light (864 g), the gaming device is nevertheless fairly stable, thanks to a weighted base and wide enough to prevent the edges from lifting from the desk during the most abrupt movements.

Logitech puts forward the “compact design” of its joystick, with an ergonomic handle that plunges clearly forward and differs from most of those of other joysticks, more vertical. If the grip is pleasant, we find that this pronounced inclination requires more force on the wrist and forearm, especially to tilt the handle to the right and left. An impression amplified by the fairly high tension at the inclination of the handle.

Regarding the placement of buttons, it is classic, but effective. There is of course a trigger under the index finger (a button), while the four buttons of the handle fall well under the thumb. A multidirectional hat finds its place just above them.

No fixing system for this joystick (suction cups …), the base simply rests on four non-slip pads and cannot be fixed to a support. It is nevertheless quite stable as it is and should not disturb the less violent players with their equipment. The handle tension is not adjustable.

The Logitech Extreme 3D Pro does not require a specific driver to operate, but it is still recommended to install the manufacturer’s video game assistant (Logitech Gaming Software). This “Profiler” software allows you to assign commands and macros to each key and create several profiles for your favorite games.

Renowned for the precision of its mice, Logitech delivers here a joystick that does not honor the reputation of the Swiss manufacturer. With an accuracy of only 10 bits (1024 x 1024 values), it is better to forget the millimeter trajectories and reserve the Extreme 3D Pro for arcade games rather than the most advanced simulations. We are far from a T.16000M from Thrustmaster, for example, and this is confirmed in our precision tests.

More handicapping, the rotation of the handle on its axis is much too flexible and it is very difficult not to turn it involuntarily when it is tilted on the sides. This can quickly become problematic in a game if you do not want to apply yaw rotation in addition to a classic roll tilt.

There is also a fairly marked notch on the maximum slopes, causing an unpleasant feeling, but fortunately without consequence on the piloting.

Despite a comfortable grip, the Extreme 3D Pro joystick misses the check mark because of low precision and too flexible rotation of the handle. For a similar price, the T.16000M from Thrustmaster does much better and ends up burying the Logitech model. The latter could possibly be suitable for arcade games, but it should not be asked too much.