If the compact market is shrinking in favor of smartphones, large sensor devices are resisting, mainly thanks to their superior image quality; what this Fujifilm XF10 proves, nevertheless not free from defects.

Released three years ago, the Fujifilm X70 stayed on the market for a very short time, so the X100F became the only compact APS-C sensor from Fujifilm, and in a not-so-compact size.

With the XF10, Fujifilm, therefore, incorporates a few elements of the X70, such as the APS-C sensor which here switches to 24 Mpx and a fixed focal length equivalent to a 28mm f / 2.8 in 24×36 in a really small body. Features are also found on the Ricoh GR III. On the other hand, there is no longer an adjustable screen or a hot shoe and the knobs on the top no longer display an engraving for the exposure time or the exposure compensation. The ring surrounding the lens was used to open the diaphragm on the X70; on the XF10, it can be assigned to different configurable functions. A joystick was added for quick movement of the collimator while hybrid autofocus technology was implemented on the sensor.

However, still no electronic viewfinder in the program, no more than a pop-up flash. Video mode allows recording in 4K, but only 15 fps. There is also a multitude of scene modes and filters with slightly caricature renderings to which we will certainly prefer the film simulation modes to the number of eleven. The camera also offers a pan-scan mode, an electronic shutter that can go down to 1/16000 s and 4K, 4K Multi Focus or HDR Photo modes. Finally, Wi-Fi and Bluetooth are present for wireless sharing and control of the device. 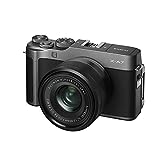 It is attractive this XF10 with its retro look and its design without protuberance. For the test, we received the highlighted gold version of a brown leather look handle matched with the strap. A black version is also available.

Despite its compactness, the grip is good thanks to a marked handle although quite fine and a thumb rest at the back. Fujifilm has placed two shortcut keys, including the Q button to access the simplified menu. Ergonomics are already seen on the GFX 50R and X-T30, but which here posed no problem of untimely support thanks to the more depressed position of the buttons.

The XF10 is larger than a Ricoh GR III and slightly heavier, but in the field, the difference is not a problem. The two devices play in the same courtyard.

On the top of the device, Fujifilm has placed three adjustment knobs. The first is used to choose the shooting mode and immediately shows a more general positioning than the X70 by displaying Portrait, Landscape or Sport and fully automatic programs in addition to the classic PASM. Unfortunately, it is not possible to produce Raw files with these automatic modes. There is also a pan-scan mode, absent from Ricoh, as well as access to creative filters.

A touch screen was already present on the X70 and it is unfortunate here that its use does not evolve more. Always useless when navigating through the menus, it will only be used to choose the focus area and trigger or to zoom in on the image in Playback mode. Difficult to understand why Fujifilm did not make the Q menu tactile as it did for the X-T3. Difficult to understand also why the brand has not renewed the adjustable screen of the X70. Because in the absence of an electronic viewfinder, it would have brought a little more comfort to the device. It is really unfortunate and embarrassing on the ground. But its main competitor, the Ricoh GR III does not have either

Since we are comparing the ergonomics of the two devices, we must recognize the XF10 a more user-friendly menu. It is lightly loaded, even if it could be even less by avoiding the few cascade settings like for autofocus, for example. The presence of the configurable simplified Q menu saves a lot of time in the most common settings and will certainly be the tool most used by its users.

Note, however, some shortcomings as a contextual help which would indicate why certain settings are grayed out. It would no doubt have helped us understand why we have never been able to use the camera flash! A shortcut to the video recording would also have been welcome. It took us a while to understand that it was after the access to the burst, the 4K Photo, the various bracketing and the HDR accessible via the Drive button! One wonders if Fujifilm did not want to hide that this XF10 had a video recording mode …

The XF10 is equipped with a 24 Mpx APS-C sensor with hybrid autofocus technology described by Fujifilm as “intelligent”, which however does not specify the number of points devoted to phase correlation analysis. It’s a safe bet that the sensor is identical to that of the X-T100 which we found particularly slow during our tests.

Fortunately, the XF10 is more responsive than the X-T100, but its results remain disappointing. It doesn’t get any better than the X70 or the Ricoh GR III.

It is particularly slow at start-up. Then, its autofocus is average, with results identical to those of the Ricoh GR III in low light and surprisingly a little worse in full light. Above all, we noted a lack of regularity in our measurements, with sometimes very good results and sometimes pumping effects before obtaining the point.

The promise of a burst at 6 fps is not kept and, above all, the buffer becomes full very quickly: it is impossible to chain more than six consecutive views in Raw without the device operating a sudden slowdown of the rhythm.

In the field, the autofocus has sometimes been very finicky and the autofocus tracking is really not up to what you can see on hybrid devices. Face and eye detection seemed fairly effective when aiming, but we found a lot of focus shifts, probably due to the slow autofocus.

The XF10 unfortunately does not benefit from the X-Trans technology which remains the prerogative of the X100F and incorporates a “classic” Bayer mosaic sensor. Its definition progresses from 16 Mpx on the X70 to 24 Mpx, which does not weigh on the image quality which remains very good.

Photographed in the same light conditions at all the sensitivities allowed by the camera, our test scene shows a very good image quality in Jpeg up to ISO 3200. From ISO 6400, the smoothing becomes too important to allow the reproduction of fine details, but the noise remains contained. It becomes more present around ISO 12 800. The sensitivity range between ISO 200 and ISO 12 800 is accessible in Raw and in Jpeg while positions 100, 25 600 and 51 200 ISO are only allowed in Jpeg. We also note a quality significantly lower than ISO 100 with excessive emphasis.

Exposure metering has been shown to be quite reliable and images flattering thanks to controlled contrast and saturation. The color temperature measurement is also effective while the film simulation modes are one of the advantages of the Fujifilm devices that we once again enjoyed using.

In Raw, we can take advantage of a margin of correction for overexposure or underexposure slightly lower than that of the best sensors on the market, but which remains comfortable with a tolerance of +1.6 EV in overexposure and approximately -3 EV in underexposure. Beyond that, the noise becomes too present.

Finally, note that the image quality of this XF10 is served by high-level optics. The sharpness is high in the center and higher than that which we were able to measure on the Ricoh GR III. On the other hand, the corners and the sides of the image are set back at all the openings.

Hidden after all the settings of the Drive key, the video mode of the XF10 is not frankly put forward by Fujifilm. And we understand why by seeing its results on our test scene.

Because if Fujifilm has placed a 4K mode, limited to 15 fps, its quality really does not encourage to use it.

Unfortunately, one cannot say better of the recording in Full HD with 60p whose results are more than mediocre. It does not exceed the quality of the GR III, which we had already judged to be quite bad.

Worse, during our recordings, we noted movements in the image whereas we obviously make our tests on tripod, without any movement. As for the autofocus tracking, it is completely inoperative and has caused pumping effects with repeated focusing losses. A disaster !

So certainly, Fujifilm has placed a microphone port for quality sound recording, but the image is so bad that the video mode is simply not recommended. Too bad the brand did not have the courage to offer a camera that does only photography, just to promote it on what it can do well.

If you are not interested in the video features of your device, you will bypass the poor performance of the Fujifilm. XF10 in this mode to focuses on its good image quality. The camera will certainly be compared to the Ricoh GR III which also has a 24MP. APS-C sensor and a 28mm f / 2.8 fixed focal length. We preferred the more flattering rendering of the Jpegs of the. XF10 and its ergonomics, despite the superior compactness of the GR. III, the mechanical stabilization of its sensor and its slightly better reactivity. If we put the price argument forward, the balance tilts even more towards the XF10.