From the Instax SQ10, the SQ20 takes back the essentials: digital capture and printing on demand. It adds a video mode and a digital zoom but unfortunately does not have a Wi-Fi connection.

Released in 2017, the Instax Square SQ10 was the first Fujifilm model to be fitted with Instax films in square format. It was also the first digital-instant hybrid model that promised measured film consumption thanks to its print-on-demand system. Since then, the brand has extended its Instax Square range with the release of the Instax Share SP-3 printer enabling square format printing from a smartphone and with the SQ6, a 100% instant model.

During the last Photokina, Fujifilm proposed a replacement for its SQ10. It is the SQ20 that takes up the ergonomics of its predecessor with a square case with rounded angles and two triggers placed on either side of the lens. The newcomer is equipped in addition to a mirror on the front but above all a 4x digital zoom and a video mode. It allows you to make 15-second sequences from which you can extract a photo for printing. The recording is done in 800 x 800 px, corresponding to the size of the machine’s print files.

The SQ20 is enriched with more creative tools like the Collage mode of several images or the Collage Time Suite mode which automatically performs a montage of photos spaced by a given time. On the other hand, it does not have a Wi-Fi connection, unlike the LiPlay recently unveiled which can therefore be used as an instant digital device or an Instax Mini printer for smartphones. 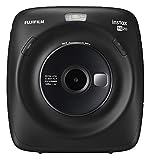 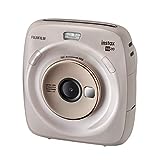 At first glance, a few things distinguish the SQ10 from the SQ20: the two cameras display the same dimensions and have a double trigger system located at the top right and left of the lens. These two buttons now have an elongated shape while they were circular on the SQ10. On closer inspection, there are many differences in ergonomics.

While the ignition was done by rotation of the lens ring on the previous model, the latter is now devolved to the activation of the digital zoom of the camera. A relatively instinctive operation that takes advantage of the front display of the direction of rotation to zoom in or out. The operation is also enabled by the notched wheel at the rear. On the top of the lens, Fujifilm renewed the built-in flash whose range is between 50 cm and 2 m. Unfortunately, there is still no shortcut to activate or deactivate the flash, and it is through the camera menu that the operation is carried out. On the front, Fujifilm also added a small mirror to facilitate the framing of selfies.

On the side, there is the USB port which is used to charge the battery of the device, whose autonomy is 100 photos, and the microSD memory card slot. Note an interesting detail: if you used the camera’s internal memory to take photos, you can then copy them to the memory card via the camera menu. The operation is unfortunately not possible for videos.

On the other side, the SQ10 had access to the battery which was removed. It is therefore impossible today to replace the SQ20 battery yourself. The Auto / Manual selector which automatically printed each photo or did it at the request of the SQ10 has also been removed, but the command remains accessible via the menu. This change is absolutely not annoying, especially since it is a safe bet that users systematically opt for a mode of operation on demand to avoid wasting the film Instax whose price remains high.

The rear of the device displays the same controls as on the SQ10, to which is now added a three-position power selector. The one in the center is dedicated to the video and the one on the right to the photo. Below, we find the menu access button as well as shortcuts to adding vignetting, contrast adjustment, exposure compensation, reading mode, and print command.

The LCD screen sees its dimensions and its definition is revised downwards with a diagonal of 2.7 “and a definition of 230,000 points only. It is little, but it does not affect the quality of the display of the menu, fairly basic, which uses large characters. It is just unfortunate that depending on the shooting mode chosen on the selector not only displays the accessible settings. The menu would have gained clarity, but we must admit that the device is still very simple to use.

In shooting conditions, the display also remains very correct, provided that you remain facing the screen. On the sides, the slab shows its limits and the image is practically illegible. The camera settings are few, this display is only used to check the framing and get an idea of ​​the exposure.

No significant development in terms of the responsiveness of the SQ20 which retains the good performance of its predecessor. The ignition is quick for this range of devices since it only requires between 1 to 2 seconds. Focusing is also very fast in bright light and low light conditions, even with the autofocus assistant deactivated. The latter uses the diode of the flash and emits an important light which can be sometimes annoying.

As on the previous model, and as on the LiPlay, it takes between 10 and 15 seconds for the Instax Square film to be extracted from the device. After about thirty seconds, the image appears, then it takes almost 2 minutes for it to stabilize and reach the maximum of its density.

The Fujifilm Instax Square SQ20 sensor produces 1,920 x 1,920 px Jpeg images. But do not imagine using it for anything other than printing Instax with the machine. Because as we noted on the LiPlay, the quality is frankly not terrible. Compression is important and details are practically absent. The quality of the images in high sensitivity is also very average. As for the images taken with the digital zoom, they have equivalent quality… since they are recorded without the zoom. However, it is a disaster in printing, the images are very degraded and the exposure is quite average!

The images produced with editing tools are saved on the card, however, the filter effects are saved in an attached .csv file, and the Jpeg image corresponds to normal mode.

As we pointed out when testing the LiPlay, we will therefore not base ourselves on the observation of these files and will prefer to focus on the use in an instant mode for which the device was designed.

There, it is rather a pleasant surprise. The SQ20 produces images of fairly consistent quality in photos as well as in print from videos. Only the zoom function should be avoided. We found the results better than with SQ10 which tended to under-exposure. They are quite close to what we saw on the SQ6, 100% instant.

The Instax process here retains its usual faults. The highlights are quickly burned and the details are not very precise. But it remains one of the best in instant with an absence of traces on the outputs, good neutrality and a good conservation.

The SQ20 is an attractive device that takes over the print-on-demand operation of the SQ10. But improves its quality of exposure. We appreciated the new video mode with image extraction which gives good results as well as the different creative composition modes. Our only complaints concern, on the one hand, the rather bad zoom at its maximum value and, on the other hand, the lack of Wi-Fi connection. The play has it, but its price is much higher than that of the Instax Mini SP-2 printer. In square format, the Instax Share SP-3 is sold at the same price as the SQ20. The explanation is therefore linked to a market strategy.