Sold for less than € 30 with its remote control in the shape of a mini-joystick, this mini-drone signed Potensic has everything for children. An impression that is quickly confirmed, but that does not mean that it lacks interest.

The A20 mini-drone from Potensic is available in different colors (red, white or green). It is available in A20W version, equipped with a front mini-camera and allowing control from a smartphone via a direct Wi-Fi connection between the two devices.

1. Potensic Upgraded A20 Mini Drone with 4 Batteries and 2 Charging Cables. Easy to Fly Even to Kids and Beginner, Having Fun for mor Time 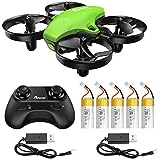 Potensic Upgraded A20 Mini Drone with 4 Batteries and 2 Charging Cables, Easy to Fly Even to Kids and Beginner, Having Fun for mor Time
Buy on Amazon 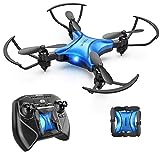 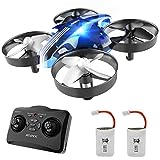 With its small size (9 x 8 cm, about 3.2 cm high), the A20 is easy to take with you. If its design is less original than that of a Eachine E013 , for example, it goes to the essentials with a fully streamlined structure and a fairly decent finish for a device of this type. Being more of a toy than anything else, we should not expect the finish of a more high-end drone like the Tello , for example, but in the category of mini-drones too compact, there is nothing surprising.

The fact remains that the Potensic A20 withstood the inevitable shocks it had to undergo during our tests. The absence of any protuberance, whether it is an antenna wire or a connector, contributes to this resistance and for a drone designed for children, it is rather reassuring.

The manufacturer nevertheless covers itself by indicating in its instructions that its mini-drone is intended for adolescents over 14 years of age. Whether or not this recommendation is respected, it is better to carefully monitor parents during the use of any drone.

On the scale, the Potensic A20 reveals a featherweight of 22.3 g. No need to manipulate a battery connector to turn it on, just activate the switch located on the back of the device. More practical, of course, but you lose direct access to the battery and therefore the possibility of easily changing it. The same goes for motors, whose wires are directly soldered to the printed circuit. Apart from the propellers, nothing is done to be changed, which is unfortunate for the longevity of the product, but is not too surprising in terms of its selling price.

Unlike the W version of the A20, this model cannot be controlled via a smartphone. To fly it, use the small radio control supplied. This takes the form of a small joystick with two sticks and two dual position triggers. It is configured in Mode 2, that is to say, the stick left controls the gas – or the height of the device, we will return – and yaw ( yaw ), while the stick right is associated with pitch ( pitch ) and the roll ( roll ).

The joystick does not look mine, but works properly thanks to its 2.4 GHz radio link. Its small size and the small spacing between the sticks does not however make it easy for large hands. We feel that it is intended primarily for children.

The Potensic A20 does not have a camera and therefore cannot film anything. In any case, this is not the vocation of mini-drones in general, rather designed for purely recreational use. If you want to film anyway and especially enjoy a video return on smartphone to control the drone from a screen, there is the Potensic A20W, technically very close, but with a small front camera.

Drone and joystick on, just orient the left stick down for pairing before you can take off. We then orient the sticks down and inside to arm the motors, before pushing the left stick to fly away. You can also press the take-off button on the joystick, located below the left stick , so that the drone takes off and stabilizes at a little over a meter in height.

If the A20 is stabilized, we cannot say that it is really stable. Care must therefore be taken from takeoff to correct its trajectory. Our copy also had an unfortunate tendency to gain height without being asked, forcing us to trigger a landing via the dedicated button – the same which is also used for takeoff – before regaining control.

Once these little problems have been resolved, we take advantage of a very simple drone to fly, since it is stabilized in height and therefore keeps – roughly – its position when you no longer touch the throttle. This controller does not really control the gases, but the height of the mini-drone, since it returns to the center automatically. A blow up makes the device go up and vice versa to make it go down. This operation is undoubtedly more intuitive for those who are used to controls in a video game and is not unpleasant however for someone already mastering the piloting of drones thanks to the flexibility of the controls. The A20 also offers 3 flight speeds, the highest also making the drone more lively.

However, we should not expect to be able to perform aerobatic feats with such a device, certainly handy, but not very powerful. We will not therefore fly outside, it would risk escaping the slightest squall and its range of twenty meters is not enough to explore the vast spaces. Forget also the fine trajectories between the furniture, the precision is not sufficient for that. We will be content here to fly indoors, from room to room following the drone.

Younger guests become familiar with flying through the headless fashion ( headless ), with which the orientation of the drone does not matter, right stick controlling the just position of the device in space ( it goes to our left if we orient the stick to the left, even if its head is aimed at the right, for example).

Despite its small 180 mAh battery, the Potensic A20 manages to hover for almost 6 minutes and 30 seconds approximately before its red LED starts to flash, a sign that it must land within 30 seconds. It is not huge in absolute terms, but still better than the average for a mini-drone of this size, most models of the Tiny Whoop type, for example, not exceeding 5 minutes of flight with their original battery.

Charging, on the other hand, takes a little more than thirty minutes, which is acceptable so as not to interrupt the flight experience for too long.

If you do not have to wait for the wonders of such a device, this small A20 shows a fairly healthy behavior and is therefore particularly suitable for a first flight experience. Its low dangerousness and its low price make it possible to entrust it to a child. Although the supervision of an adult remains strongly recommended. Too bad that its design does not make its maintenance easier in case of breakage.