The Nikon D5300 is a high-performance and responsive mid-range SLR that responds to a wide variety of uses and photographic situations.

If you are looking for a mid-range SLR, the D5300 meets most of your photo needs with its comfortable design and many features. It competes head-on with the 700D , its “equivalent” at Canon. Launched at 900 euros in kit with a stabilized 18-55 mm lens, it is now around 770 euros in the same configuration 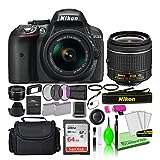 Even if in appearance this SLR camera strongly resembles its predecessor (the D5200 ), Nikon has succeeded in reducing the body by a hundred grams. Which gives us a weight limited to 480 grams without a battery.

The D5300 is easy to handle, most knobs and buttons are easily accessible. The Live View switch has been repositioned near the shooting mode selector dial. Making it easier to operate than on previous Nikon models. However, its position may require regular tilting of the device to reach the control with the right thumb.

Other elements hidden inside the case differentiate the D5300 from the D5200. The most important is the new DX sensor ( Nikon’s APS-C format ) with a definition of 24 million pixels, which does without an optical low-pass filter. Its absence contributes to exploiting the maximum definition of the sensor and obtaining detailed and precise images. But it is a compromise since it can also generate moiré more easily.

For video enthusiasts, the D5300 stands out for its ability to record in 1080p at 50 frames per second in PAL. Nikon gives its SLR the possibility of continuing to zoom during recording. It inherits the D7000’s 39 point autofocus.

The Nikon D5300 has full connectivity with a 3.5 mm mini-jack microphone input, a mini HDMI jack, a USB port and an AV output. It also supports RAW recording in 12 and 14 bits and includes some photo editing options accessible in the “Retouch” menu.

For novice photographers, Nikon has provided many options to facilitate the transition to the SLR. Many scene modes accompany the automatic mode. Icons on the selection dial allow you to precisely choose the shooting conditions, such as macro or landscape.

The Nikon D5300 benefits from and takes full advantage of the new Expeed 4 image processor. Performance is there. It can take pictures at a burst rate of 5.1 frames per second with a fixed focus. With a continuous zoom for each image, this speed is reduced to 2.5 images per second. A rate that falls after ten photos in JPEG and about 5 in RAW.

The entire autofocus system of the D5300 works perfectly in a large number of situations, whether in low light, indoors or in bright light outdoors. Users can choose to stay on a selection of AF areas, switch to 9, 21 or 39 points dynamic AF, use 3D tracking, or opt for central focus.

Like other Nikon cameras, it has a silent trigger mode as well as a 10-second self-timer. The shutter speed is measured at 0.4 seconds indoors under reduced light conditions and 0.2 seconds outdoors under conditions more common for photography.

The Nikon D5300 has been tested with an 18-140 millimeter kit, which offers slightly more amplitude than the 18-105 millimeter from Nikon and much more than the standard 18-55 millimeter lens.

In fully automatic mode or in Program mode, the D53000 does not disappoint. The exposure is correct, although slightly conventional, but this offers more latitude to avoid problems in difficult light conditions. Naturally, those who want to test the limits of the device in manual mode and in RAW will be served as they should.

The images remain clean up to ISO 800 included, the camera succeeding perfectly in keeping the appearance of noise under control in both JPEG and RAW (the raw retains more details in high-sensitivity photos).